How dentistry has changed throughout history 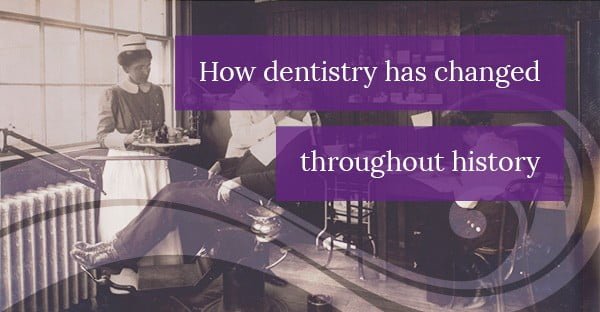 The history of dentistry

The origins of dentistry date back almost 14,000 years. As we covered in one of our other blog posts, an infected tooth was found in Italy that had been cleaned with flint tools. The tooth was dated to be between 13,820 and 14,160 years old. This represents the oldest known example of dentistry.

A dental filling was found in Slovenia that was dated to be 6,500 years old. It was made from beeswax and is thought to be the oldest example of a dental filling.

Many ancient papyri from Ancient Egypt, including the Ebers Papyrus, Kahun Papyri, Brugsch Payprus and Hearst papyrus contained possible treatments and recipes for treatments of toothache, infections and loose teeth. Early attempts of dental prosthetics have been found in remains of some ancient Egyptians, although this may have been prepared after the death of the individual and given to them posthumously for aesthetic reasons.

The father of modern dentistry was undoubtedly Pierre Fauchard, a French surgeon who was born in Saint-Denis-de-Gastines in the 17th Century. He is most widely known for writing “Le Chirurgien Dentiste” (“The Surgeon Dentist”), which detailed a lot of basic oral anatomy and functions, but also covered more detailed analysis of the signs and symptoms of oral pathology, as well as operative methods for removing decaying teeth and restoring them, periodontal disease, orthodontics and tooth transplantation.

Fauchard was a highly skilled surgeon who managed to pioneer many dental instruments from other tools, such as watch makers’ tools, jewellers’ tools or even the tools of barbers. He also introduced dental fillings as a way to treat dental cavities. Fauchard was also the first to assert that acids derived from sugars, such as tartaric acid, were responsible for the decay of teeth.

After Fauchard, the study of dentistry really began to take off. It wasn’t until the 19th Century, however, that major advances in technology allowed dentistry to evolve from a trade to a profession. At the end of the 19th Century, dentistry came under the control of the government through governmental regulation.

At Sensu, our highly qualified cosmetic dentists use the latest technological advances to ensure you get the best treatment and aftercare.